It is with deep gratitude and excitement for the year ahead that we announce two new Idiot String supporters: the Crockett Community Foundation and the Edward J. Daly Foundation.

The Crockett Community Foundation will make it possible for us to offer both a public workshop series in Port Costa, and in-class programs for students in the John Swett Unified School District. The Foundation is also underwriting a reduced-cost ticket program for residents of Port Costa, Crockett and Tormey. If you’re a local, you can attend our workshops for $10 and shows for just $5!

The Crockett Community Foundation is dedicated to supporting local projects that foster volunteerism and strengthen the local community. If you’d like to volunteer with Idiot String at one of our events, please drop us a line at idiotstring@gmail.com. 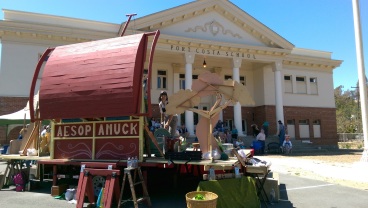 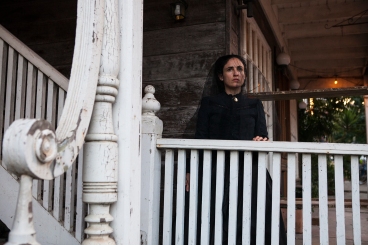 Josephine (Maria A. Leigh) holds herself aloof in a scene from ELIXIR OF LIFE (2017). Photo by Serena Morelli.

Mr. Meekins practicing a Shakespearean soliloquy at the Bull Valley Roadhouse in 2015.

Idiot String in Port Costa: at the Port Costa School setting up a Peripatetic Players summer tour performance, exploring the Theatre of Dreams during a sneak preview of Elixir of Life, and preparing a thirty-minute version of Romeo and Juliet in honor of the Bull Valley Roadhouse’s anniversary.

The Edward Joseph Daly Foundation is sponsoring design elements for our new site-specific production in Port Costa that will premiere this June. As the audience discovers the play taking place all around them at the Port Costa School and throughout downtown Port Costa, they’ll get up close to the props and costumes made possible by the Daly Foundation.

Edward Joseph Daly, who was the owner of Oakland-based World Airways, and his wife June V. Daly, were lifelong philanthropists who quietly supported humanitarian causes, arts education, and social justice efforts. Less quietly, Mr. Daly is known for audaciously airlifting 57 orphans out of South Vietnam in 1975. Since his death in 1984, his family has been carrying on his legacy of giving through the Foundation that bears his name.

Josephine (Maria A. Leigh) writes in her room as Anita (Kristin Matia) looks on in an evening scene from Elixir of Life (2017). Photo by Serena Morelli.

Some of the props and costumes featured in Elixir of Life. Photos by Serena Morelli.

Thank you to our new funders!

It’s the support of organizations like these — and individuals like you — who make it possible for us to create plays, workshops, and other events for you. Learn more about donating here.

One thought on “Thank you, new funders!”